Here is a list of approved assistance for this event:

FEMA can provide assistance for items not covered by insurance for homeowners and renters. You cannot receive assistance from both your insurance company and FEMA for the same damage. Doing so is illegal insurance fraud.

The following types of assistance may be provided by FEMA’s Individuals and Households Program.

Financial assistance is available for necessary expenses and serious needs directly caused by the disaster, including:

The City of Temple has established the Temple Recovery Taskforce to connect residents affected by Winter Storm Uri with available resources.

“With so many residents still feeling the effects of this unprecedented weather event, we wanted to make sure we could get them in touch with local organizations that could meet their needs,” City Manager Brynn Myers said.

The Temple Recovery Taskforce, headed up by the city’s Housing and Community Development Department, is coordinating local organizations that are ready and available to provide recovery services to residents who have been impacted by Winter Storm Uri.

The taskforce will use Crisis Cleanup, a free website that helps coordinate relief efforts by participating organizations, including services such as debris removal, home repair and water damage repair at no charge. It does not provide resources that require a licensed or skilled tradesman, such as plumbing or electrical work.

Requests can be submitted through the City of Temple’s Housing Resource Center by calling 254-298-5999, Monday through Friday from 8 a.m.-5 p.m.

“Our goal is to help as many residents as we can,” Nancy Glover, director of Housing and Community Development, said. “We believe our already-established partnerships with local organizations will help meet those outstanding needs of our residents and the city’s goal of a quick recovery.”

These services are not provided by the City of Temple. The City is only coordinating with local organizations who provide services. There is no guarantee that a request for assistance will be fulfilled.

A list of local contractors who may be able to help with more complex repairs is available here. The City doesn’t endorse these organizations but is simply providing contact information for ease in finding assistance. Please remember to check references and choose your contractor wisely.

Residents and businesses may also be eligible to receive a Federal Disaster Loan through the United States Small Business Association. For additional information on SBA and to apply, click here.

Additional resources are available through the Federal Emergency Management Association. FEMA can provide assistance for items not covered by insurance for homeowners and renters. For additional information, visit disasterassistance.gov

Mayor Tim Davis has authorized the City of Temple to waive permit fees associated with necessary repairs due to storm damage.

Please note permit and inspections are still required, but any associated fees should be waived.

To download a list of permitted contractors click here. The City of Temple encourages all residents to research local contractors prior to choosing a contractor to complete repairs.

Watch out for fraudulent charities and disaster relief schemes related to Winter Storm Uri. Here are a few tips:

The Tool Library provides residents with the necessary resources for home repairs and modifications through a no cost membership. This is a concept similar to that of a book library, but instead of books, we lend tools!

By providing access to quality and costly tools, the Tool Library gives ALL Temple residents the opportunity to repair, enhance, and beautify their homes, allowing them to maintain a sense of independence and dignity.

Any Temple resident over the age of 18 with a valid Temple Public Library Card is welcome to use the Tool Library. Members are required to fill out a membership application, sign a liability waiver and present a government-issued ID.

How to Identify and Prevent Mold in Your Home

Do Not Burn Pressure Treated Wood

If you are in need of food, the following locations will be distributing food:

The City of Temple and Temple ISD will be distributing water and food in certain neighborhoods Monday afternoon.

Residents can pick up one case of water and bag of food for their family at one of the following locations while supplies last beginning at about 12:30 p.m.:

Food and water distribution is intended for families and individuals who reside in these neighborhoods and are unable to travel to other pickup locations. Resources will be distributed by TISD school buses.

(February 19, 2021) The City of Temple will have limited supplies of bottled water available for residents still without water.

Bottled water distribution locations will open at 2pm on Friday, 2/19.

Water will be limited to one case per household while supplies last.

Potable water is also available at Fire Stations #3-8. Citizens must bring their own container to fill up with potable water:

If you have questions regarding this matter, you may contact the Call Center at 254.298.5550. This call center line is answered by a live representative Monday - Friday, 8am - 5pm. If you have immediate needs, please call 2-1-1. 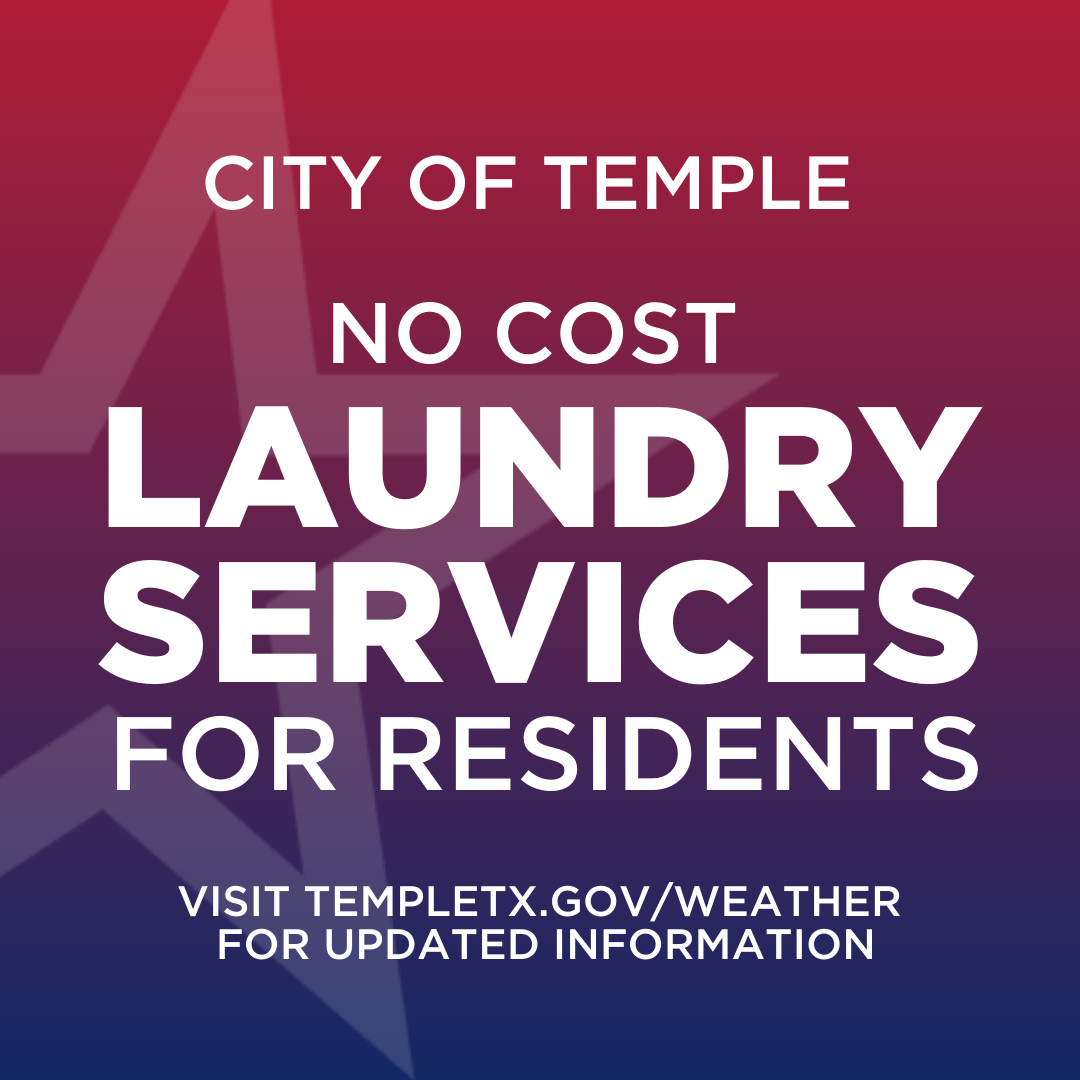 No Cost Laundry Services For Residents

As part of its continued winter storm recovery efforts, the City of Temple will make laundry facilities available at no cost Tuesday and Wednesday for residents who may not have laundry access. Detergent will be provided while supplies last.

Temple, TX (Feb. 20, 2021) -- The Boil Water Notice has been lifted for the previously-affected areas. City of Temple water customers no longer need to boil water.

Should you have any questions regarding the Boil Water Notice please call 254.298.5611. 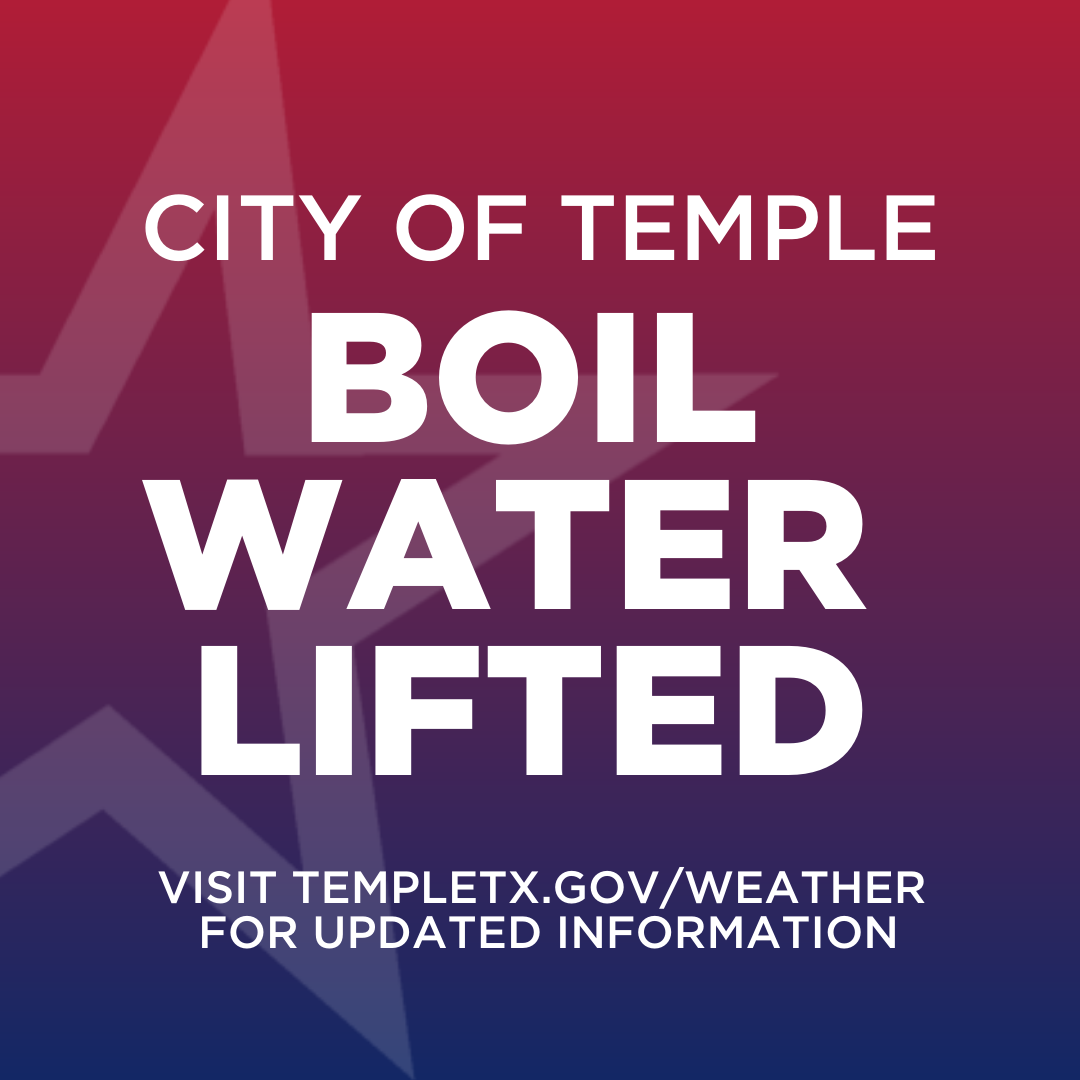 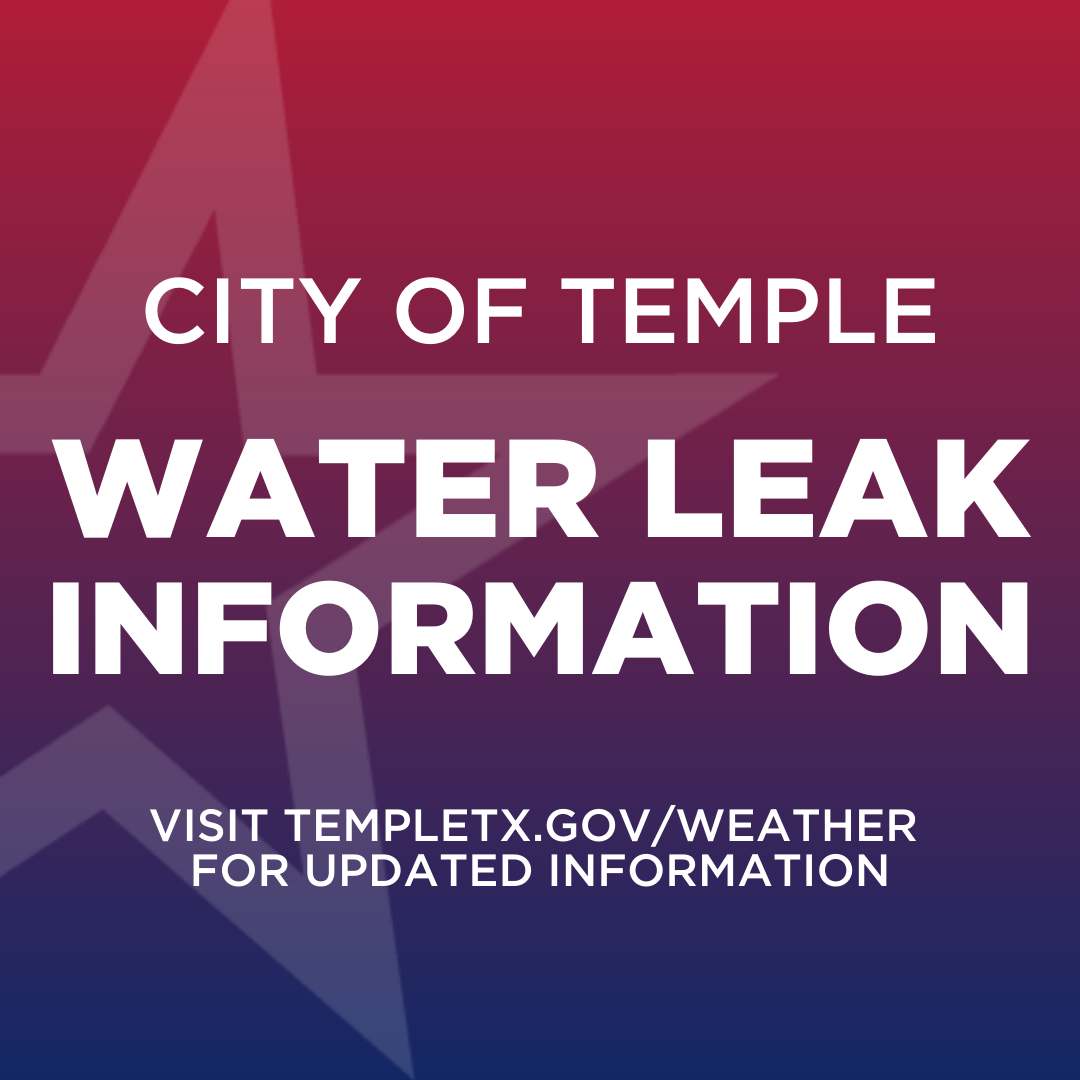 What You Should Know About Water Leaks

Water leaks will reveal themselves as pipes continue to thaw. Here are a few tips on how to detect and respond to leaks.

The following facilities will remain open at night when temperatures drop below freezing:

If you are in a life-threatening situation, call 911. If you need other assistance or information regarding shelters, call 211. Do not call the Temple Police Department for non-police related incidents.

The City of Temple’s water system is operational. The City is not shutting off water service.

If you have a water leak or burst pipes, turn off water at your main if you are able to. If you have an ACTIVE water leak or water emergency, call the Utilities Department at 254.298.5611. These lines are prioritizing active leaks and emergencies. You will receive a voicemail, please leave a message with your name, address of the leak and contact phone number. Voicemail is checked every 15 minutes.

City crews and contractors are working around the clock responding to water leaks and water main leaks around town, but we do not have the capacity to handle preventative water shut offs or non-active leaks at this time. If you do not have an active leak, wrap your pipes, open any cabinets and try to drip your water line if possible.

If you have discolored water, let it run until it runs clear. The discolored water is caused by minerals the pipes and usually shows when water mains are isolated for leak repair. The water is safe, but crews are unable to flush lines with current conditions.

We hear you, Temple, and we are with you.

The City of Temple is not an electric service provider. The Electric Reliability Council of Texas (ERCOT) manages the flow of electric power throughout most of the state. Unfortunately, the City does not have the ability to repair power infrastructure or restore power.

We understand the safety concerns our community has about power outages. These outages scale state-wide and the Oncor team is working hard to restore power across Texas. Please check the Oncor Facebook page for the most updated information on outages.

If you are safe in your home, do not leave. To stay safe during a power outage:

If you do have power (and when your power is restored) PLEASE CONSERVE. Set your thermostat to 68 degrees or below. Unplug any devices/electronics that are not in use. Conserving power can help get us all back on the grid.

The Secure Document Shred event planned for Feb. 20 has been canceled. If residents have documents they would like to be shredded, they can bring documents to the Solid Waste facility at 3219 Bullseye Ln. on Saturday and place them in the blue bin outside of the front door to be shredded. Otherwise, the next document shred event will be scheduled for April 10th. Updates will be posted at templetx.gov/solidwaste

What is the city doing to restore my power?

The City of Temple is not an electric service provider. The Electric Reliability Council of Texas (ERCOT) manages the flow of electric power throughout most of the state. Unfortunately, the City does not have the ability to repair power infrastructure or restore power.

Due to high demand for electricity the Texas power system is facing a significant shortfall of power generation.

The city recommends that residents reduce their energy use to lessen strain on the power grid:

Why do some residences or business have power while others are without?

According to Oncor, controlled outages are being designated so that hospitals and other critical infrastructure remain intact. This means that customers near critical facilities, or those in limited areas where rolling outages won’t take place in order to maintain grid stability, may not experience outages, while those farther from these facilities or areas may be out multiple times or for longer instances.

What is the city doing to help road conditions?

The City of Temple sanded major overpasses and bridges. However, the city’s two sanding trucks went out of operation and the Streets department was unable to keep up with the demand due to the unprecedented nature of this storm. The Texas Department of Transportation (TxDOT) is assisting as resources are available, however, they also have limited resources at this time.

How is the city helping residents during this time?

Several city departments have coordinated efforts to ensure that local warming shelters have resources they need to assist residents during this time. City staff coordinated donations of food, water and other supplies, and also coordinated and provided transportation to the warming shelters.

Is the City shutting off my water?

The City of Temple is NOT turning off water in the City and does not have any distribution issues. There may be low water pressure in your area due to frozen pipes or isolated leaks. Crews have reduced pressure in the 31st Street area to repair a leak. Again, the City is NOT shutting off water. Please share this post to get the accurate information out to our citizens.

Why is my water coming out dirty/unclear?

The discolored water is likely minerals from the pipes. It usually shows when we isolate mains for leak repair.

Residents can run their water until it clears up. It is not harmful but is unappetizing.

We would normally flush out of the hydrants but we cannot currently do that as effectively.