The City also has programs in place to partially pay health insurance premiums for certain classes of retirees from City employment. City retirees are eligible for retiree health benefits if they meet certain requirements relating to age and service. The retiree health benefits are described in the labor agreements between the City and unions, and in City resolutions.

The table below shows a summary of the long-term unfunded liabilities for the City. 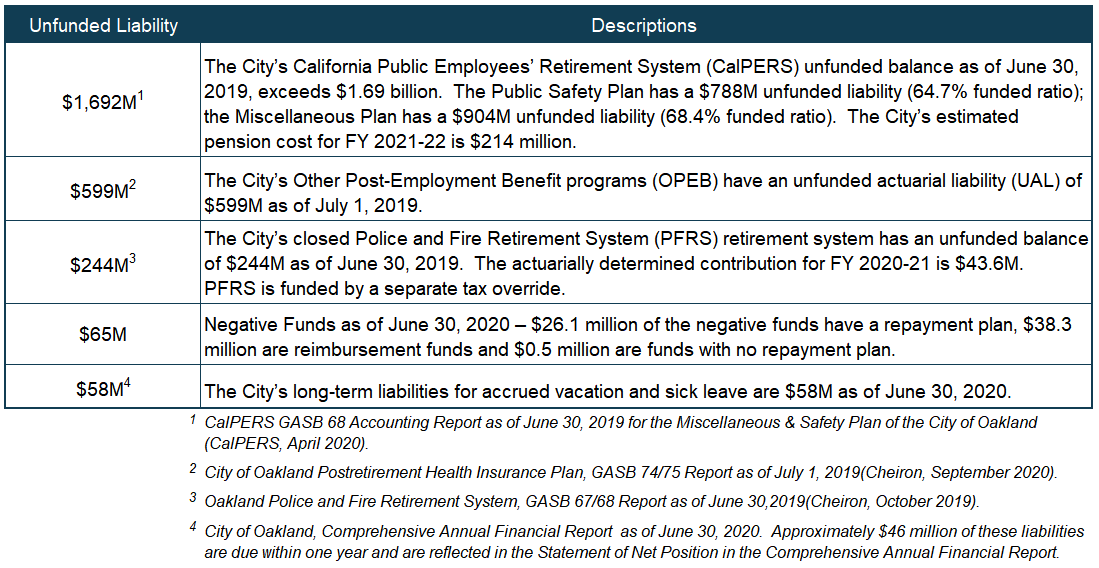 The City has active defined benefit pension plans for Safety and Miscellaneous employees through CalPERS. These plans are funded on an actuarial determined basis each year pursuant to CalPERS requirements. The CalPERS Board of Administration has taken several actions in recent years that have increased both the City’s unfunded liabilities and annual required contributions, which are captured in this two-year budget.

The Police and Fire Retirement System (PFRS) is a closed pension system that provides pension, disability, and beneficiary payments to retired Police and Fire sworn officers hired prior to July 1, 1976. As of July 1, 2019, PFRS covered no active employees and 798 retired employees and beneficiaries. An actuarial valuation of PFRS is conducted at least every two years. The most recent actuarial valuation was based on data as of July 1, 2019.

The City historically funded its retiree medical benefits (also known as “Other Post-Employment Benefits” or “OPEB”) on a pay-as-you-go basis, meaning funding was not set aside as benefits were earned. Rather, the City paid OPEB costs for existing retirees when the monthly premiums became due.

In addition, the City Council also approved the City’s OPEB Funding Policy on February 26, 2019 (Resolution No. 87551 C.M.S.) authorizing the set aside of 2.5% of payroll (approximately $10 million per year) into the City’s OPEB Trust each year. These reforms were expected to provide significant long-term relief to the City's retiree medical program. However, due to adverse financial conditions caused by COVID-19 crisis, the City Council authorized the suspension of contributions into the OPEB Trust for Fiscal Years 2019-20 and 2020-21.

The City’s policy and its agreements with employee groups permit employees to accumulate earned, but unused, vested vacation, sick leave, and other compensatory time. All earned compensatory time is accrued when incurred in the government-wide financial statements and the proprietary fund financial statements. A liability for these amounts is reported in the governmental funds only if they are due and payable. As of June 30, 2020, the current liability was $58 million.