The City of Oakland ("City") is located on the east side of the San Francisco Bay in the County of Alameda. Oakland is bordered by 19 miles of coastline to the west and rolling hills to the east, which provide unparalleled vistas of the Bay and the Pacific Ocean. In between are traditional, well-kept neighborhoods, a progressive downtown, and superior cultural and recreational amenities. Oakland serves as the administrative hub of the County of Alameda, the regional seat for the federal government, the district location of primary state offices, and the center of commerce and international trade for the Bay Area.
Oakland is the eighth largest city in the State of California, with an estimated population of 433,697, and a wealth of resources and opportunities. It is home to the Port of Oakland, which handled more than 2.46 million 20-foot freight containers in 2020. Oakland International Airport served more than 4.6 million travelers in 2020. The Airport is served by 11 different airline brands with more than 65 nonstop domestic and international destinations.
Oakland is a mature city that has been able to preserve its abundant natural beauty and resources. The City has over 100 parks (totaling over 2,500 acres) within its borders, as well as several recreational areas along its perimeter. Lake Merritt, the largest saltwater lake within a U.S. city, borders the downtown area. Its shoreline is a favorite retreat for joggers, office workers, and picnickers. At dusk, the area sparkles as the Lake is lit with its "Necklace of Lights." Lake Merritt is the oldest officially declared wildlife sanctuary in the United States, dating back to 1870. 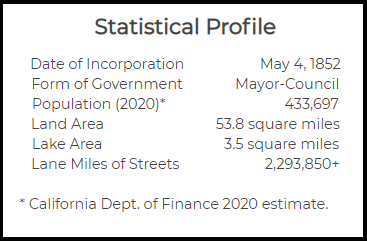 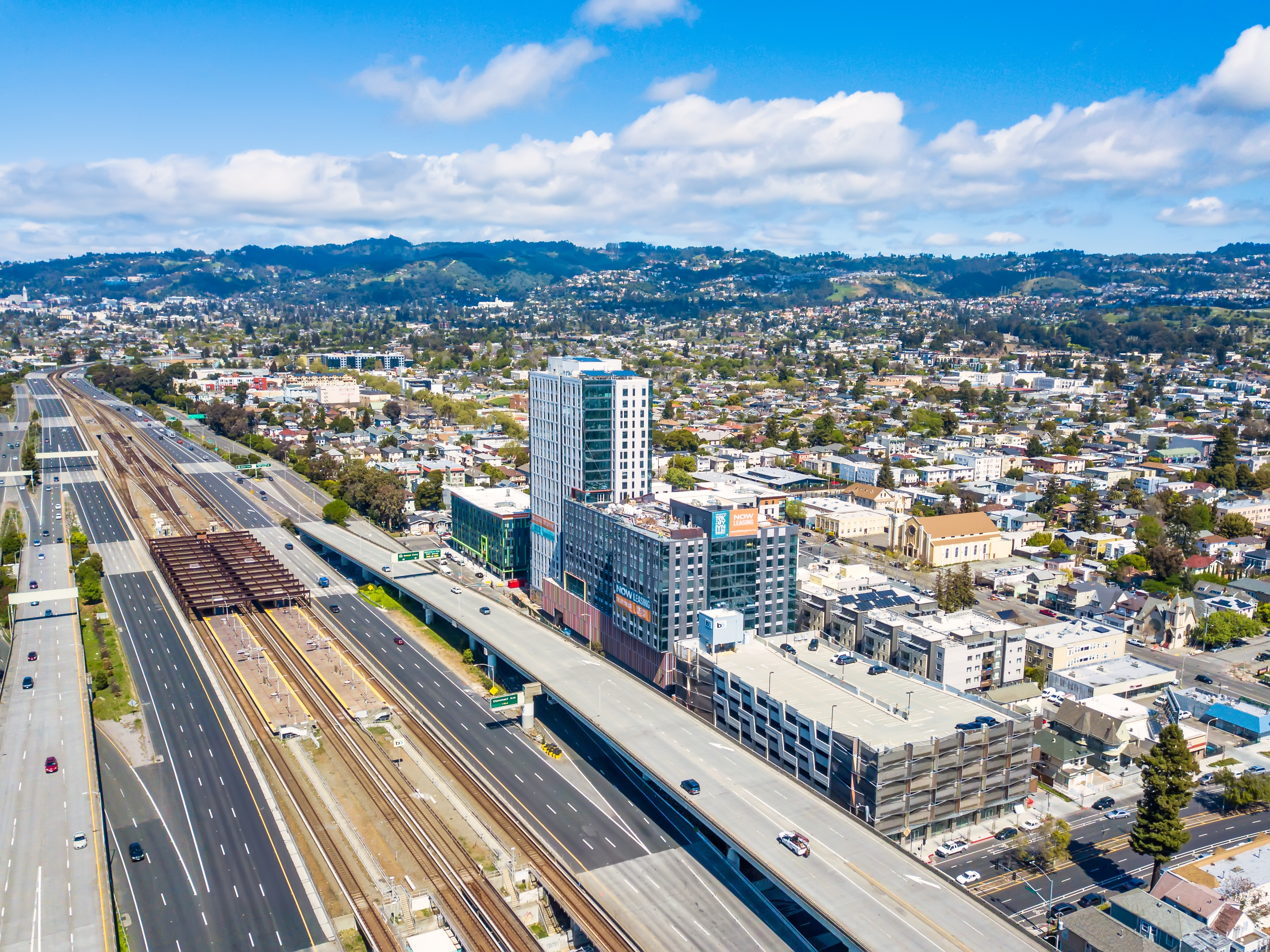 The City of Oakland has a Mayor-Council form of government.

The Mayor is elected at-large for a four-year term and can be re-elected only once. The Mayor is not a member of the City Council; however, he or she has the right to vote as one if the Councilmembers are evenly divided.

Located within one of the nation’s largest metropolitan areas, Oakland is the economic heart of the East Bay. Oakland has diversified its economic base significantly over the past few decades, offering a healthy mix of trade, government, financial, medical, information technology, publishing and service-oriented occupations. Industries with the largest growth in jobs over the last several years are: professional and business services, education, healthcare, leisure and hospitality, traditional and specialty food production, and technology. The Maker Movement has led to growth in the industrial arts, applied technology, artisan production and custom manufacturing.
Oakland offers abundant resources to its businesses and residents: state-of-the-art transportation, a vibrant dining and entertainment scene, and utility facilities keep the City running smoothly. Oakland has the infrastructure and economic base to support and attract a diverse mix of advanced industries. Downtown Oakland offers competitive office space, a fiber-optic infrastructure and the amenities for both traditional and emerging enterprises. The well-maintained freeways, mass transit systems, and ferry service make getting to and from downtown Oakland a relatively quick and easy process.
Several new office and mixed-use buildings, public facilities, hotels, convention facilities, park enhancements, and outdoor art create a cosmopolitan environment in the downtown area. Waterfront restaurants and shops at Jack London Square, as well as the burgeoning Old Oakland and Uptown districts provide lively nighttime attractions. The City’s neighborhood retail areas continue to grow, as evidenced by Oakland’s 10 Business Improvement Districts. In addition, the Oakland Tourism Business Improvement District was formed in 2015 to ensure strong and sustainable marketing programs for tourism promotion. Oakland plays a pivotal role in the East Bay Trade Area; a variety of incentives are available to companies located in the City’s Foreign Trade and Recycling Market Development Zones. Oakland has 30 census tracts that have been designated Opportunity Zones, which provides a tax incentive meant to revitalize communities and create jobs in designated low-income areas.
City departments take a proactive approach and use streamlined processes to best serve the needs of the business community. The Economic & Workforce Development Department links businesses with the many services available to them throughout the area and serves as an ombudsman for companies dealing with the City. The City’s staff works with merchants in each commercial district to promote the district, obtain loans, expedite permits and arrange for City services.
Oakland is the county seat (administrative center) for Alameda County. The U.S. Census Bureau has estimated the county population at 1,671,329 for 2019 and a median household income of $99,406. In the City of Oakland itself, some 162,419 households have a median income of $73,692 and spend more than $3 billion on retail sales annually. Oakland is a city of rich history, impressive growth, and a promising future.

According to the California Department of Finance, Oakland was ranked the eighth largest city in the State of California in 2020, with an estimated population of 433,697 residing within approximately 54 square miles. According to the 2010 United States Census (the most recent available), the City’s population was 390,724 persons at a density of roughly 7,000 people per square mile. This growth is due to the recovery and resurgence of the local economy, as well as Oakland’s growing popularity as a Bay Area housing and real estate destination.

1200 B.C. - Ohlone Indians settle in the area that would become Oakland.

1772 A.D. - Spanish explorers are the first Europeans to visit the East Bay.

1849 - During the California Gold Rush, Oakland becomes the mainland staging point for passengers and cargo traveling between the Bay and Sierra Foothills.

1852 - Oakland was chartered as a city and almost immediately thereafter, construction of shipping wharves began. Building the large wharves and dredging a shipping channel positioned Oakland as an independent point of destination.

1869 - The Central Pacific Railroad selected Oakland as the terminus of the new transcontinental railroad, providing a vital link to the East.

1910 - Oakland’s population more than doubles in ten years from 66,960 to over 150,000 as people and businesses relocate from earthquake-ravaged San Francisco. Oakland regains control of the long-lost waterfront by final settlement of litigation, which had lasted over a half century and cost several millions of dollars.

1936 - The Oakland-San Francisco Bay Bridge, one of the engineering wonders of the world, opens months before the Golden Gate Bridge.

1942 - The Permanente Foundation Hospital is dedicated in Oakland, the first in the chain of Henry J. Kaiser’s health plan hospitals.

1950 - Children’s Fairyland opens in Lakeside Park. Swelled by huge numbers of workers who flocked to the city for WWII jobs, the U.S. Census puts Oakland's population at 384,575. Oakland's African American population soars from 8,462 in 1940 to 47,562 in 1950. The military makes substantial improvement to the Port’s facilities.

World War II brought tremendous changes to Oakland. Huge numbers of workers moved to the Bay Area to work in local shipyards, and many of these people, as well as large numbers of military personnel who mustered out at Treasure Island and the Oakland Army Base, chose to remain in the Bay Area. As a result, the City’s population increased by nearly one third between 1940 and 1950.

2010 - A new generation of restaurateurs and specialty food producers has fueled an epicurean renaissance. Oakland’s sizzling arts and dining scene is no longer a local secret as national media outlets spread the word on our vibrant city.

Oakland has a rich literary and cultural heritage. Such historical notables as writers Bret Harte, Jack London, Joaquin Miller, Ina Donna Coolbrith, Jessica Mitford, Narman Jayo, Ishmael Reed and Gertrude Stein; architect Julia Morgan; and dancer Isadora Duncan are just a few who have left their cultural mark on the City. It is also the birthplace of the West Coast Blues.

2015 - The U.S. Census ranked Oakland as the eighth largest city in California, with an estimated population of 419,267. According to a University of Wisconsin study, Oakland is the most ethnically diverse city in the United States. There are at least 100 different languages and dialects spoken here.

Located in the geographic center of the Bay Area, Oakland has been recognized as a vital transportation hub for more than 100 years. The combination of train, bus, maritime, aviation, freeway and amenities guarantee ease of travel for residents and efficient channels of commerce for businesses relying on the City’s easy access. Oakland is the headquarters of the Alameda-Contra Costa Transit District (AC Transit) and the Bay Area Rapid Transit (BART) system. Oakland’s Port is a primary sea terminal for transporting cargo between the western United States and the Pacific Rim, Latin America and Europe. Access to air cargo services is minutes away at the Oakland International Airport. Transportation service providers include:

• Serves all 13 cities and adjacent unincorporated communities in 364 square miles along the east shore of San Francisco Bay. Annually,

San Francisco and other major Bay Area attractions. All buses are accessible to people with disabilities.

• All buses are equipped with bicycle racks.

• Pre-COVID, average weekly ridership was 412,596 in the three BART counties of Alameda, Contra Costa, and San Francisco, as well as

• Electric-powered trains traveling up to 70 mph connect 50 stations, including 8 stations in Oakland. Travel time between downtown

Oakland and downtown San Francisco averages only 11 minutes on BART.

development projects that are in design or construction.

International Airport. Opened in November 2014, the OAC provides a seamless connection with driverless trains that travel the

alignment in eight minutes and depart every 5 to 20 minutes. Nearly 850,000 trips were made between BART and the Oakland

• BART is the USA’s cleanest major transit system in its class, emitting fewer pounds of carbon per passenger mile than any other transit

OAK - The Oakland International Airport (OAK) is the second largest San Francisco Bay Area airport offering, prior to the pandemic, over 300 daily passenger and cargo flights.

• Typically hosts more than 13 million passengers annually. Due to the COVID-19 pandemic, 2020 traffic was about 4.6 million.

• Daily service to rail destinations throughout the U.S. is offered at the Oakland Amtrak Station in Jack London Square and service along

the Capitol Corridor also stops at the Coliseum Amtrak Station.

• Car-sharing and Ride sharing are easily accessible and offered by various agencies.

• The Bikeshare program provides 1,400 bikes in Oakland, Berkeley and Emeryville.

• Up to 1,500 shared electric scooters “e-scooters” are offered throughout Oakland by several private companies.

• Plus, all open space & park trees

them converted to LED lights

Oakland offers a diverse array of educational opportunities for students of all ages. Oakland Unified School District (OUSD) serves nearly 50,000 students and is committed to building a Full-Service Community School District, as defined by the U.S. Department of Education, focused on high academic achievement while serving the whole child, i.e. social and health services. Oakland is also home to numerous institutions of higher learning.

medicine and is the largest source of newly registered nurses in California.

• California College of the Arts – Known for its broad, interdisciplinary programs in art, design, architecture, and writing, it offers studies in

Oakland’s medical facilities are among the best in the nation. The medical community provides the latest and most sophisticated medical technology for the diagnosis and treatment of disease. There are now four hospitals providing full service in Oakland. Together, these hospitals have invested more than $2 billion in new construction and seismic upgrades.

networks, a strong education and teaching program, a diverse workforce, state-of-the-art research programs and facilities and

of the greater East Bay.

maintenance through an integrated system of hospitals, clinics, and health services staffed by individuals who are responsive to the

diverse cultural needs of our community.

flagship of its national system of hospitals, headquartered here along with the nation’s first health maintenance organization (HMO),